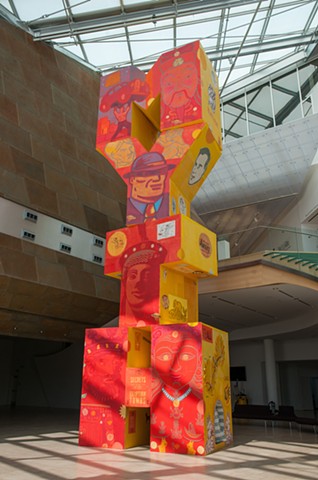 "Rising over 40 feet in the Taubman Museum of Art's City of Roanoke atrium is a new totem by Roanoke-based artist Ann Glover, her tallest and most ambitious public sculpture to date. Commissioned by the museum as part of its ongoing series of large-scale works, the piece 'Myth' features four stacked letters spelling out its title, a childlike homage to the mythic stories that we carry with us as we move through the world. The surface of each letter is layered with pieced canvas, paint and stenciled forms--heads, words and mysterious characters and scenes. Glover's sources are cross-cultural and wide-ranging, from old comic books, sideshow banners and advertising ephemera to res-use lettering and animal emblems. In her world of collage, everything is fair game: Hindi Gods, Dick Tracy, UFO's, Medusa, Superman, Buddha, Confucius, Sheens (Queenof the Jungle)-- these familiar icons occupy the same enigmatic space, forming unique juxtapositions. Glover's visual storytelling also includes phrases and texts drawn from magazines, historical texts, and personal letters. Audience members are invited to discover their own narratives and physically engage the work through multiple entry points into the letter "H," including an arched doorway, side pottholes, and a hidden view discovered only when lying on the floor." -from the Catalog, Taubman Museum of Art, June 27, 2013 - January 11, 2014